This includes the changelog for VIP 12 that is available for regular VIPS and VIP Gold.
You can obtain access for just 16.95$ by clicking here.

Changelog (Note, this is from version 12. Version 11 fixes are also included in this version, but the fixes from v11 is not listed here, so there are even more fixes done in the recent versions, than what you can read below)

Get access to the release by becoming a VIP here:
https://www.emucoach.com/payments.php

- Firelands!
After Firelands not being scripted even near to completion on the previous repack versions, we are happy to announce that Firelands has had a complete rework and most of the issues are now fixed! This means there should only be small issues remaining, if anything. It took a lot of time, but we agreed that it would be worth it, as we feel like Firelands is a big part of Cataclysm and hereby of Emucoach. Happy raiding!
-- This includes a rework to every of the Firelands bosses, blizzlike details, the gates that were previously not used.
-- Now there are also the blizzlike fire gates, that only open after you kill the bosses, so you can't skip parts of Firelands to get to the end part.
-- The Firelands bridge is also fully functional now, and so is the cinematic, when you click the bridge object.

- Throne of the Four Winds entrance platform no longer disappears, meaning that you won't risk falling underground before entering.

- ".title add command" fixed, as many have reported and requested:
Added a Worldserver.conf possibility to disable the automated title verification system. More info below:
Currently, if you do .title add on a player account, the title will be removed upon equipping because the player is not "eligble" for it. That's a "protection" system on titles to prevent cheating etc.
We have however gotten reports of people wanting to change this, so they can add titles from .title add to their players that are not GMS.
Due to that, we have now expanded the system and given you the possibility to disable the Title Protection System.
If you would like to disable it, go into Worldserver.conf, search for Config.No.Title.Requirements = 0 and change the value from 0 to 1 and restart server.

- Fixed a crash with channeling spells.
- Protector of the Innocent proc fix.
- Fixed Hand of Sacrifice with Dragon's Breath.
Fixes https://www.emucoach.com/cataclysm-reports/6639-hand-sacrifice.html
- Fixed an issue where Glyph of Exorcism would proc the DoT, even when the player did not have the glyph.
- Fixed Eye for an Eye paladin talent. It now procs properly.
- Fixed Glyph of Resilient Grip

- Ensure that the fishing bobber expires when the Fishing channeling ends, and don't allow fish to be hooked in the instant the spell is cast. (TrinityCore#23448) (Thanks Wyrseth)
- Fixed Stable Masters
- Fixed an issue where you would die when using .unstuck
Fixes https://www.emucoach.com/cataclysm-reports/6804-die-unstuck.html

Now I would like to take the opportunity to thank @dolgan. He has made a huge list of DB fixes towards the repack, that benefits all of us. Make sure to him him an applauds, he definitely deserves the credit! Thank you for that.
Dolgan's update list (Emucoach team already reviewed it and approved, meaning that it's already included in Version 12):

-- Quest 13506 started from item, gameobject 44979 does not exist
-- Gameobject 208790 is now a questgiver
-- Change some creature spawns to match mobs around
-- Remove equipment from all spawns of mobs that don't have equip but db says that has equipment entry
-- Give various spawns their equipment
-- Make sure some objects drops req. quest item

-- Fix Completed Text for Quest 25934
-- Remove 9 Duplicate Spawns that shouldn't exist
-- Fix quest number for quest starter
-- Removed quests from 2 creatures that shouldn't give them
-- NPC 38018 should to be spawned by script, and be friendly to Alliance

-- Remove 37 pool entries for non existent game object spawns
-- Set item Tainted Helboar Meat (ID 23270) to only drop when you have the quest for them
-- Remove invalid waypoint for Crithto (ID: 51938)

-- Fix gossip text to say Rut'theran Village instead of Auberdine
-- Remove Quest from NPC that isn't supposed to give it
-- Fix 2 NPC sayings
-- Make Quest 26916 require you to actually do what it wants you to.
-- Fix 2 Gossip options.

-- Remove 4 spells from a trainer that isn't supposed to give them
-- Made an innkeeper be able to set hearth location
-- Fix NPC's Name (Kudos to @TQPS for pointing this one out)
-- Infected Deer in EPL shouldn't be mounted on a bear.

-- Add money loot to item Hidden Stash (61387)
-- Quests are meant to be repeatable. (NOTE: You're meant to only be able to have one of the buffs from these active at a time, not sure how the do that, so a minor exploit here until it can be fixed)
-- Add item Hidden Stash to 12 creature's loot tables that it was missing from
-- Added conditions for each creature that drops Hidden Stash, so that you are required to have the buff for it to drop. 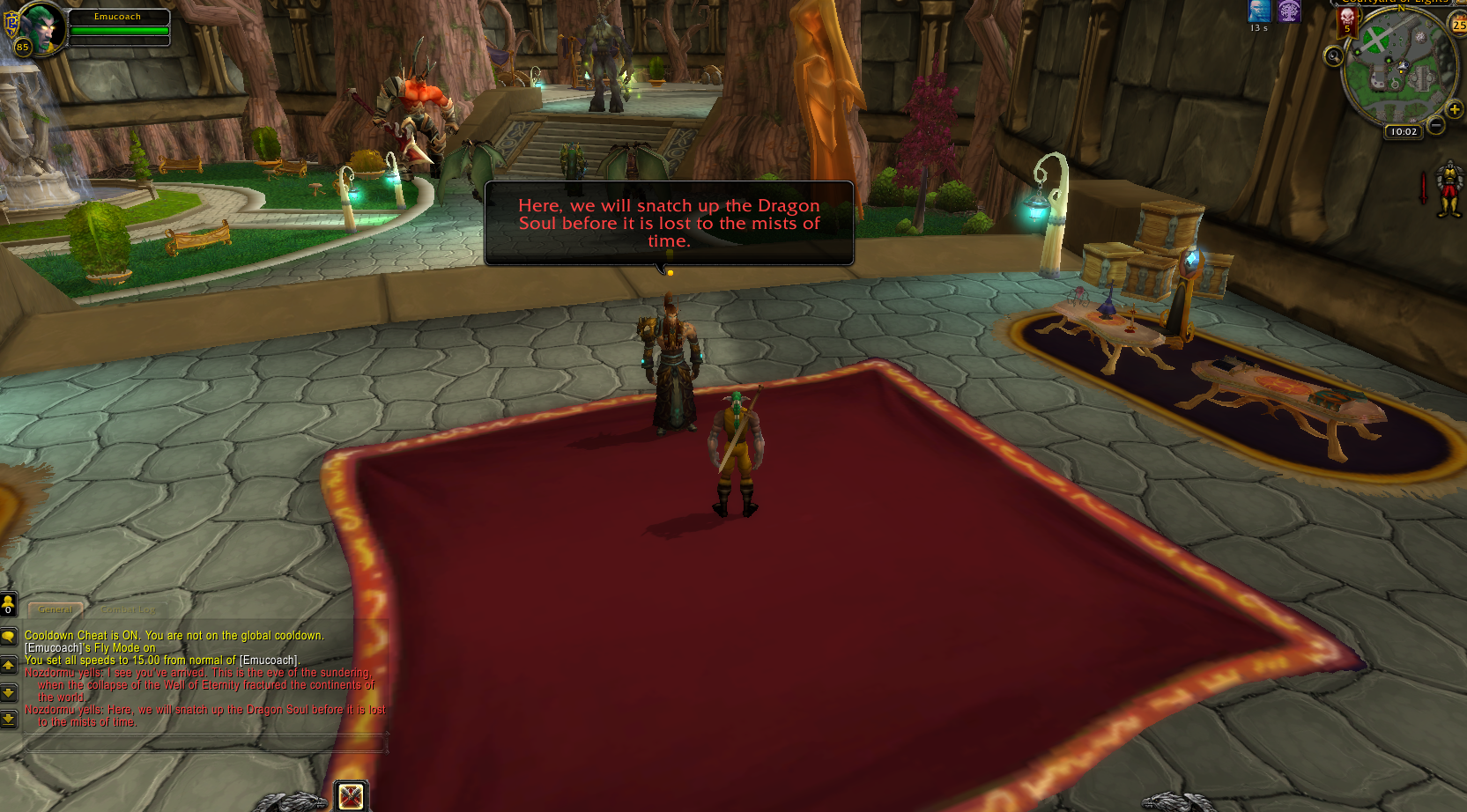 What do i need to do, in order to download the files?
D

pnt said:
What do i need to do, in order to download the files?
Click to expand...

You need to be a VIP member to download Version 12, (which you can do by donating)
Then on the VIP section of the forum you can get to Premium Releases, which is where you can download it.
P

I donated, but I don't see any VIP section.

pnt said:
I donated, but I don't see any VIP section.
Click to expand...

I did, no response so far

pnt said:
I did, no response so far
Click to expand...

I don't know where to report bugs, but in the Death Knight zone, after the quest "An end to all things", causes the phase-shifting to fallback to the beginning of the quest chains. Meaning I cannot continue on.
M

Hey. Thank you for your support!

Send me a message with your Paypal email & amount & transc ID, and I will add it right away

[MENTION=1]ExO[/MENTION] do you have any future plans improving the bots ?
When you ding 85, its almost impossible to finish dungeons duo to lack of dmg, and an oom issue for spellcasters ?
Last edited: Feb 28, 2020

Blackvision said:
@ExO do you have any future plans improving the bots ?
When you ding 85, its almost impossible to finish dungeons duo to lack of dmg, and an oom issue for spellcasters ?
Click to expand...

Yes, I have plans for that. Eg, by fixing the mana regen issue. But I also prioritize the other general bug reports (eg the ones that you reported about dungeons). But yes, it’s coming - in V13.

ExO said:
Yes, I have plans for that. Eg, by fixing the mana regen issue. But I also prioritize the other general bug reports (eg the ones that you reported about dungeons). But yes, it’s coming - in V13.
Click to expand...

[MENTION=1]ExO[/MENTION] How come the AHBOT doesnt upload anything if only these two settings are enabled ?
If i include misc items, it is working just fine.